Mouth ulcers in cats: how to prevent and treat them? – Take care of your cat

The mucous membrane of the cat’s mouth, but also the tongue and lips, are sometimes the site of more or less extensive wounds, also called ulcers. These oral lesions can be caused by viruses such as calicivirus or by physical or chemical agents. A little apart, the labial ulcer is part of the clinical picture of feline eosinophilic syndrome.

Ulcers in the mouth or on the tongue of the cat are a fairly common condition, but not always easy for an owner to spot.

You may be alerted by a refusal to eat despite an attraction to food, a drooling cat (hypersalivation or ptyalism) or even abnormal prostration. But what does an oral ulcer look like in cats?

An ulcer is an erosion of the lining. It usually appears as a sunken, redder patch on the cat’s gums, palate or tongue. He may also bleed. The ulcer roughly corresponds to our canker sores, but it can be very extensive, especially lingually. The ulcer of the cat’s tongue is likely to affect all around it.

The ulcer is to be distinguished from gingivitis, which manifests itself by slightly raised inflammatory red lesions on the gums. They are usually located at the necks of the teeth and associated with periodontitis and tartar.

A cat with mouth ulcers is less lively. He is reluctant to eat and may drool. You can try examining its mouth for these erosive lesions, but be careful, it can be painful and your pet may defend itself.

In case of symptoms, do not hesitate to go to your veterinarian who will be able to objectify the presence of ulcers in your cat’s mouth.

What Causes Mouth and Tongue Ulcers in Cats?

The causes are varied:

Calicivirosis in cats is a contagious, viral disease caused by a calicivirus. The diagnosis is made by PCR on a swab of the oral cavity.

Symptoms of feline calicivirosis are mouth ulcers often accompanied by fever and rhinitis or conjunctivitis. There is no specific treatment for this pathology, but vaccination of kittens is recommended from the age of 8 weeks.

They mainly concern tongue ulcers in cats and follow the licking of an object that is too hot or a corrosive product. Almost all of the tongue can be affected. The cat is in great pain and stands prostrate, mouth open and tongue hanging out. He drools profusely.

Sometimes the animal has stepped on an irritating substance and it is by licking its paws to clean itself that it damages its tongue. Watch out for your curious little felines when you tinker or clean …

Finally, ulcers can be caused by wounds following the ingestion of bones, edges, pieces of wood …

Processionary caterpillars are insects responsible for serious ulcers and necrosis in the mouth when animals lick their stinging bristles.

Cats are less affected than dogs by this type of accident because they tend to touch the caterpillars with their paws at first.

Some toads are also irritants, but in addition to hypersalivation, they induce general symptoms.

At an advanced stage of renal failure in cats, uremia (an increase in the level of urea in the blood, a waste product normally eliminated by the kidneys) can lead to the formation of ulcers in the oral cavity of the cat. The animal presents other clinical signs such as weight loss, anorexia and vomiting.

This specific lesion affects the upper lips. Although it can be quite large, it is usually painless. Cat lip ulcer is part of an entity called feline eosinophilic syndrome, named after a certain type of white blood cell (eosinophils). The origin of this syndrome remains poorly understood although an allergic cause is suspected. 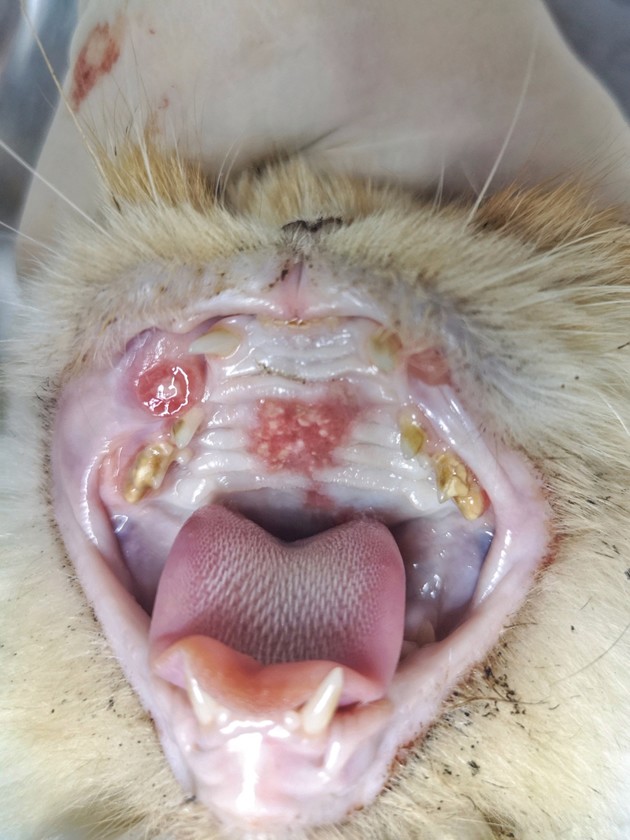 Treatment must be initiated in a veterinary clinic. It usually uses painkillers and antibiotics to prevent secondary infections.

If the cat is unable to feed, it is possible to put an esophageal probe in it to feed it with liquid food. These probes are often well tolerated and the cat can go home with them, while the erosion heals.

Cat’s tongue ulcers are often very impressive; however, if well cared for, they heal fairly quickly. With calicivirosis or kidney failure, remission of cat mouth ulcers may be more difficult to achieve.

Also read: 5 tips for giving your cat a bath without getting scratched!

L214 broadcasts shocking images of a slaughterhouse in Finistère

Wally, the whale lost in the Mediterranean, is currently in the port of Sète